At least four persons and 7 animals have died in a fire that broke out in 62 hectares of forest area in the last 24 hours.

The Principal Chief Conservator has informed that 12,000 guards and fire watchers of the state forest department have been deployed to douse the fire. So far, the fire has destroyed property worth Rs 37 Lakhs

uttarakhand Chief Minister Tirath Singh Rawat today held an emergency meeting over fire incidents via video conferencing. “We asked the Centre to give us two choppers to take control of fire situation. We have been given the same. We are hoping to douse fire using choppers today,” the chief minister said 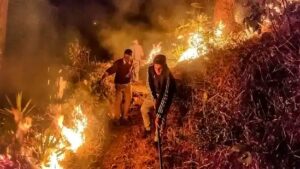